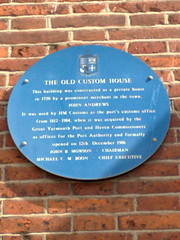 The Old Custom House This building was constructed as a private house in 1720 by a prominent merchant in the town, John Andrews It was used by HM Customs as the port's customs office from 1812-1984, when it was acquired by the Great Yarmouth Port and Haven Commissioners as offices for the Port Authority and formally opened on 12th December 1986