Wilhelmina (Dutch pronunciation: [ʋɪlɦɛlˈminaː] (); Wilhelmina Helena Pauline Maria; 31 August 1880 – 28 November 1962) was Queen of the Netherlands from 1890 until her abdication in 1948. She reigned for nearly 58 years, longer than any other Dutch monarch. Her reign saw the First and the Second World Wars, as well as the Dutch economic crisis of 1933. The only child of King William III of the Netherlands and Emma of Waldeck and Pyrmont, Wilhelmina ascended to the throne at the age of ten after her father's death in 1890, under her mother's regency. After taking charge of government, Wilhelmina was generally credited with maintaining Dutch neutrality during the First World War and solving many of her country's resultant problems afterwards. By that time, her business ventures made her the world's first female billionaire in dollars. Following the German invasion of the Netherlands in 1940, Wilhelmina fled to Britain and took charge of the Dutch government-in-exile. She frequently spoke to the nation over radio and came to be regarded as a symbol of the resistance. By 1948, she was the only survivor of the sixteen monarchs who were sitting on their thrones at the time of her coronation and her family was one of seven European royal houses remaining in existence. Wilhelmina returned to the Netherlands following its liberation in 1945. Increasingly beset by poor health after the war, she abdicated in favour of her daughter Juliana in September 1948 and retired to Het Loo Palace, where she died in 1962. 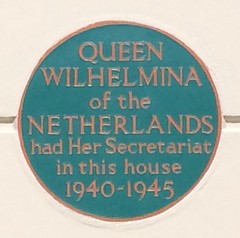 77 Chester Square, London, United Kingdom where they had Her Secretariat

Stationsweg 10, 3151 HS, Hoek van Holland, Netherlands where they sailed from