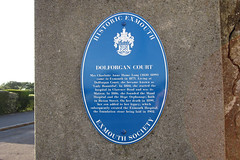 Dolforgan Court. Mrs Charlotte Anne Hume Long (1830-1899) came to Exmouth in 1875. Living at Dolforgan Court she became known as 'Lady Bountiful'. In 1884 she started the hospital in Clarence Road and was its Matron. In 1886, she founded the Maud Hospital and the Hope Orphanage, both in Bicton Street. On her death in 1899, her son added to her legacy, which subsequently created the Exmouth Hospital, the foundation stone being laid in 1902.