Nathan Walker (born 7 February 1994) is a Welsh-born Australian professional ice hockey forward who is currently playing for the Springfield Thunderbirds in the American Hockey League (AHL) while under contract to the St. Louis Blues of the National Hockey League (NHL). Walker, who was born in Wales, grew up in Australia and first played ice hockey there. He moved to the Czech Republic in 2007 in order to further his career, and joined the junior program of HC Vítkovice, a member of the Czech Extraliga. He first played for the senior team in 2011, becoming the first Australian ice hockey player to play for a professional senior team in Europe. Along with HC Vítkovice, Walker was loaned to several lower-level Czech teams. In 2013 Walker signed with the Youngstown Phantoms of the junior United States Hockey League, moving to North America for the first time. He attended the training camp of the Washington Capitals in 2013 and signed with their AHL affiliate Hershey. Walker represents Australia internationally, and first played for them at the 2011 IIHF World Championship Division II tournament, where he helped his team win their group and earn a promotion to Division I for the following year. Passed over in the previous two NHL Entry Drafts, Walker was selected by the Washington Capitals in the third round of the 2014 NHL Entry Draft, the first Australian selected in an NHL draft. After a few years in the AHL, Walker joined the Capitals in 2017, the first Australian to play in the NHL. He was placed on waivers and claimed by the Edmonton Oilers in the same season, but was re-acquired by the Capitals after only two games with the Oilers, and won the Stanley Cup with the Capitals in 2018. 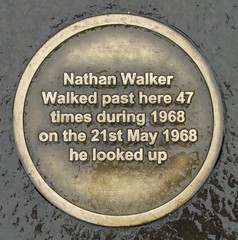 Grainger Street, Newcastle upon Tyne, United Kingdom where they walked past