Field Marshal Bernard Law Montgomery, 1st Viscount Montgomery of Alamein, KG, GCB, DSO, PC, DL (/məntˈɡʌməri ... ˈæləmeɪn/; 17 November 1887 – 24 March 1976), nicknamed "Monty" and "The Spartan General", was a senior British Army officer who served in the First World War, the Irish War of Independence and the Second World War. Montgomery first saw action in the First World War as a junior officer of the Royal Warwickshire Regiment. At Méteren, near the Belgian border at Bailleul, he was shot through the right lung by a sniper, during the First Battle of Ypres. On returning to the Western Front as a general staff officer, he took part in the Battle of Arras in April–May 1917. He also took part in the Battle of Passchendaele in late 1917 before finishing the war as chief of staff of the 47th (2nd London) Division. In the inter-war years he commanded the 17th (Service) Battalion, Royal Fusiliers and, later, the 1st Battalion, Royal Warwickshire Regiment before becoming commander of the 9th Infantry Brigade and then General officer commanding (GOC), 8th Infantry Division. During the Western Desert campaign of the Second World War, Montgomery commanded the British Eighth Army from August 1942, through the Second Battle of El Alamein and on to the final Allied victory in Tunisia in May 1943. He subsequently commanded the British Eighth Army during the Allied invasion of Sicily and the Allied invasion of Italy and was in command of all Allied ground forces during the Battle of Normandy (Operation Overlord), from D-Day on 6 June 1944 until 1 September 1944. He then continued in command of the 21st Army Group for the rest of the North West Europe campaign, including the failed attempt to cross the Rhine during Operation Market Garden. When German armoured forces broke through the American lines in Belgium during the Battle of the Bulge, Montgomery received command of the northern shoulder of the Bulge. This included temporary command of the US First Army and the US Ninth Army, which held up the German advance to the north of the Bulge while the US Third Army under Patton relieved Bastogne from the south. Montgomery's 21st Army Group, including the US Ninth Army and the First Allied Airborne Army, crossed the Rhine in Operation Plunder in March 1945, two weeks after the US First Army had crossed the Rhine in the Battle of Remagen. By the end of the war, troops under Montgomery's command had taken part in the encirclement of the Ruhr Pocket, liberated the Netherlands, and captured much of north-west Germany. On 4 May 1945, Montgomery accepted the surrender of the German forces in north-western Europe at Lüneburg Heath, south of Hamburg, after the surrender of Berlin to the USSR on 2 May. After the war he became Commander-in-Chief of the British Army of the Rhine (BAOR) in Germany and then Chief of the Imperial General Staff (1946–1948). From 1948 to 1951, he served as Chairman of the Commanders-in-Chief Committee of the Western Union. He then served as NATO's Deputy Supreme Allied Commander Europe until his retirement in 1958. 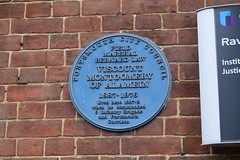 In June 1940 after the hazards of Dunkirk Field Marshal Viscount Bernard Montgomery established in this building his divisional headquarters. Here he strenuously prepared for the task which confronted him. In due time his military genius led to the vital success of El-Alamien 1942, and to the outstanding contribution he made to final European victory in 1945. This tablet was erected by the people of Frome in gratitude to him and those who served with him.

?, Frome, United Kingdom where they was headquartered

Field Marshal Bernard Law Montgomery 1887-1976 Commander of the British Eighth Army and of all Allied ground forces during Operation Overlord. Adopted Amesbury as his rear HQ in World War II

Amesbury School, Amesbury, United Kingdom where they was headquartered