The Specials, also known as The Special AKA, are an English 2 Tone and ska revival band formed in 1977 in Coventry. After some early changes, the first stable lineup of the group consisted of Terry Hall and Neville Staple on vocals, Lynval Golding and Roddy Radiation on guitars, Horace Panter on bass, Jerry Dammers on keyboards, John Bradbury on drums, and Dick Cuthell and Rico Rodriguez on horn. Their music combines a "danceable ska and rocksteady beat with punk's energy and attitude". Lyrically, they present a "more focused and informed political and social stance". The band wore mod-style "1960s period rude boy outfits (pork pie hats, tonic and mohair suits and loafers)". In 1980, the song "Too Much Too Young", the lead track on their The Special AKA Live! EP, reached No. 1 in the UK Singles Chart. In 1981, the recession-themed single "Ghost Town" also hit No. 1 in the UK. After seven consecutive UK Top 10 singles between 1979 and 1981, main lead vocalists Hall and Staple, along with guitarist Golding, left to form Fun Boy Three. Continuing as "The Special AKA" (a name they used frequently on earlier Specials releases), a substantially revised Specials line-up issued new material until 1984, including the top 10 UK hit single "Free Nelson Mandela". After this, founder and songwriter Jerry Dammers dissolved the band and pursued political activism. The group re-formed in 1993, and have continued to perform and record with varying line-ups, none of them involving Dammers.

band member of The Selecter 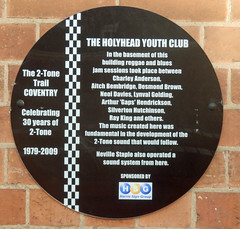 The Holyhead Youth Club. In the basement of this building reggae and blues jam sessions took place between Charley Anderson, Aitch Bembridge, Desmond Brown, Neol Davies, Lynval Golding, Arthur 'Gaps' Hendrickson, Silverton Hutchinson, Ray King and others. The music created here was fundamental in the development of the 2-Tone sound that would follow. Neville Staple also operated a sound system from here.