Samuel Plimsoll (10 February 1824 – 3 June 1898) was a British politician and social reformer, now best remembered for having devised the Plimsoll line (a line on a ship's hull indicating the maximum safe draught, and therefore the minimum freeboard for the vessel in various operating conditions). 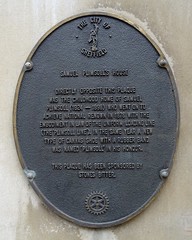 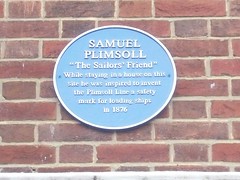 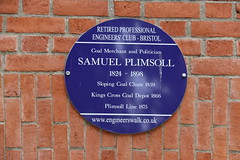 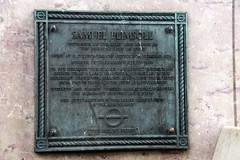 Samuel Plimsoll's House. Directly opposite this plaque was the childhood home of Samuel Plimsoll (1824-1898) who went on to achieve national renown in 1875 with the embodiment in law of the Uniform Loading Line (The Plimsoll Line). In the same year a new type of canvas sole with a rubber band was named 'Plimsoll' in his honour.

?, Redcar, United Kingdom where they stayed

Samuel Plimsoll originator of the load line known as the Plimsoll Line on ships. Born at 9 Colston Parade, Bristol on February 1824. Member of Parliament 1868 to 1880. In 1872 published "Our Seamen - an appeal" in which he shewed that a large proportion of sailors in the Merchant Service who perished at sea lost their lives from preventable causes such as overloading. Initiated and carried through almost single handed The Merchant Shipping Act of 1876. Died at Folkestone in 1898 buried at Cheriton a village nearby.

Samuel Plimsoll 1824-1898 Samuel Plimsoll was a politician and social reformer. He is widely known for the introduction of the 'Plimsoll Line', a sign on ships which indicates the safe limit to which they can be loaded. He had seen how countless sailors' lives were being lost in overloaded 'coffin ships' and was determined to change this. As a Member of Parliament. he eventually succeeded in getting agreement for the loadline, despite opposition from wealthy ship owners. Samuel Plimsoll lived in Folkestone in the last years of his life and is buried in St Martin's Churchyard, Cheriton.

2 Radnor Street, Folkestone, United Kingdom where they was