Colonel Thomas Edward Lawrence CB DSO (16 August 1888 – 19 May 1935) was a British archaeologist, army officer, diplomat, and writer, who became renowned for his role in the Arab Revolt (1916–1918) and the Sinai and Palestine Campaign (1915–1918) against the Ottoman Empire during the First World War. The breadth and variety of his activities and associations, and his ability to describe them vividly in writing, earned him international fame as Lawrence of Arabia, a title used for the 1962 film based on his wartime activities. He was born out of wedlock in August 1888 to Sarah Junner (1861–1959), a governess, and Sir Thomas Chapman, 7th Baronet (1846–1919), an Anglo-Irish nobleman. Chapman left his wife and family in Ireland to cohabit with Junner. Chapman and Junner called themselves Mr and Mrs Lawrence, using the surname of Sarah's likely father; her mother had been employed as a servant for a Lawrence family when she became pregnant with Sarah. In 1896 the Lawrences moved to Oxford, where Thomas attended the High School and then studied history at Jesus College, Oxford from 1907 to 1910. Between 1910 and 1914 he worked as an archaeologist for the British Museum, chiefly at Carchemish in Ottoman Syria. Soon after the outbreak of war in 1914 he volunteered for the British Army and was stationed at the Arab Bureau (established in 1916) intelligence unit in Egypt. In 1916 he travelled to Mesopotamia and to Arabia on intelligence missions and quickly became involved with the Arab Revolt as a liaison to the Arab forces, along with other British officers, supporting the Arab Kingdom of Hejaz's independence war against its former overlord, the Ottoman Empire. He worked closely with Emir Faisal, a leader of the revolt, and he participated, sometimes as leader, in military actions against the Ottoman armed forces, culminating in the capture of Damascus in October 1918. After the First World War, Lawrence joined the British Foreign Office, working with the British government and with Faisal. In 1922 he retreated from public life and spent the years until 1935 serving as an enlisted man, mostly in the Royal Air Force (RAF), with a brief period in the Army. During this time he published (1926) his best-known work Seven Pillars of Wisdom, an autobiographical account of his participation in the Arab Revolt. He also translated books into English, and wrote The Mint, which detailed his time in the Royal Air Force working as an ordinary aircraftman. He corresponded extensively and was friendly with well-known artists, writers, and politicians. For the RAF, he participated in the development of rescue motorboats. Lawrence's public image resulted in part from the sensationalised reporting of the Arab revolt by American journalist Lowell Thomas, as well as from Seven Pillars of Wisdom. In 1935, Lawrence was fatally injured in a motorcycle accident in Dorset. 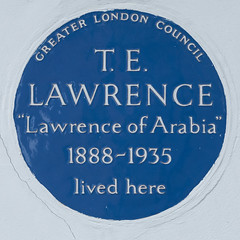 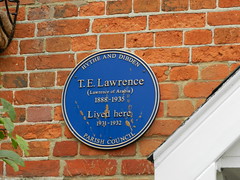 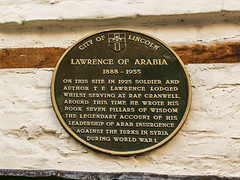 T. E. Lawrence (Lawrence of Arabia) - Until conveyed to the Corporation of London in September 1930, 18 acres of land at the top of Pole Hill was owned by T E Lawrence, the famous soldier, writer and scholar. It was here that he originally intended to erect a house with his friend Vyvyan Richards in which to print fine books including his classic "Seven Pillars of Wisdom". This never came to pass, although until 1922 Richards lived here in a hut called "cloisters"

Lawrence of Arabia 1888-1935 on his return from India in 1929, T. E. Lawrence under the assumed name of Shaw was posted to a flying boat squadron at RAF Mount Batten. He remained in the marine craft section until his discharge in february 1935.

Lawrence of Arabia 1888-1935. On this site in 1925 soldier and author T. E. Lawrence lodged whilst serving at RAF Cranwell. Around this time he wrote his book Seven Pillars of Wisdom the legendary account of his leadership of Arab insurgence against the Turks in Syria during World War 1.

33 Steep Hill, Lincoln, United Kingdom where they was