Martin Van Buren (/væn ˈbjʊərən/ van BYUR-ən; born Maarten van Buren (Dutch pronunciation: [ˈmaːrtə(ɱ) vɑm ˈbyːrə(n)]); December 5, 1782 – July 24, 1862) was an American lawyer and statesman who served as the 8th president of the United States from 1837 to 1841. A founder of the Democratic Party, he had previously served as the 9th governor of New York, the 10th United States secretary of state, and the 8th vice president of the United States. Later in his life, Van Buren emerged as an elder statesman and an important anti-slavery leader who led the Free Soil Party ticket in the 1848 presidential election. Van Buren was born in Kinderhook, New York, where most residents were of Dutch descent and spoke Dutch as their primary language. He was the first president to have been born after the American Revolution — in which his father served as a patriot — and is the only president to have spoken English as a second language. Trained as a lawyer, he entered politics as a member of the Democratic-Republican Party, won a seat in the New York State Senate, and was elected to the United States Senate in 1821. As the leader of the Bucktails faction, Van Buren emerged as the most influential politician from New York in the 1820s and established a political machine known as the Albany Regency. Following the 1824 presidential election, Van Buren sought to re-establish a two-party system with partisan differences based on ideology rather than personalities or sectional differences; he supported Jackson's candidacy in the 1828 presidential election with this goal in mind. He ran successfully for governor of New York to support Jackson's campaign, but resigned shortly after Jackson was inaugurated so that he could accept appointment as Jackson's secretary of state. In his cabinet position, Van Buren became a key Jackson advisor, and built the organizational structure for the coalescing Democratic Party. He ultimately resigned to help resolve the Petticoat affair, and briefly served as the U.S. ambassador to the United Kingdom. At Jackson's behest, the 1832 Democratic National Convention nominated Van Buren for vice president of the United States, and he took office after the Democratic ticket won the 1832 presidential election. With Jackson's strong support and the organizational strength of the Democratic Party, Van Buren successfully ran for president in the 1836 presidential election, defeating several Whig opponents. However, his popularity soon eroded with his response to the Panic of 1837, which centered on his Independent Treasury system, a plan under which the federal government of the United States would store its funds in vaults rather than in banks; more conservative Democrats and Whigs in Congress ultimately delayed his plan from being implemented until 1840. His presidency was further marred by the costly Second Seminole War (a result of continuing Jackson's Indian removal policy); and his refusal to admit Texas to the Union as a slave state as an attempt to avoid heightened sectional tensions. In 1840, Van Buren lost his re-election bid to William Henry Harrison, the nominee of the anti-Jacksonian Whig Party. Van Buren was initially the leading candidate for the Democratic Party's nomination again in 1844, but his continued opposition to the annexation of Texas angered Southern Democrats, leading to the nomination of James K. Polk instead. Van Buren was the newly formed Free Soil Party's presidential nominee in 1848, and his candidacy helped Whig nominee Zachary Taylor defeat Democrat Lewis Cass. Van Buren returned to the Democratic Party after 1848, but grew increasingly opposed to slavery, and became one of the party's outspoken abolitionists. He supported the policies of President Abraham Lincoln, a Republican, during the American Civil War. He died in Kinderhook in July 1862, aged 79. In historical rankings, historians and political scientists often rank Van Buren as an average or below-average U.S. president, due to his handling of the Panic of 1837. However, Van Buren is largely remembered today as a leader in the formation of the two-party system in the United States. 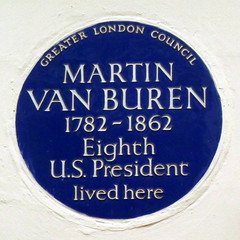