Samuel Wanamaker, CBE (born Wattenmacker; June 14, 1919 – December 18, 1993) was an American actor and director who moved to the United Kingdom after becoming fearful of being blacklisted in Hollywood due to his communist views. He is credited as the person most responsible for saving The Rose Theatre, which led to the modern recreation of Shakespeare's Globe Theatre in London, where he is commemorated in the name of the Sam Wanamaker Playhouse, the site's second theatre. 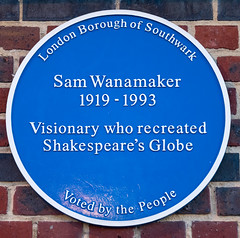