David Hilbert (; German: [ˈdaːvɪt ˈhɪlbɐt]; 23 January 1862 – 14 February 1943) was a German mathematician and one of the most influential and universal mathematicians of the 19th and early 20th centuries. Hilbert discovered and developed a broad range of fundamental ideas in many areas, including invariant theory, the calculus of variations, commutative algebra, algebraic number theory, the foundations of geometry, spectral theory of operators and its application to integral equations, mathematical physics, and foundations of mathematics (particularly proof theory). Hilbert adopted and warmly defended Georg Cantor's set theory and transfinite numbers. A famous example of his leadership in mathematics is his 1900 presentation of a collection of problems that set the course for much of the mathematical research of the 20th century. Hilbert and his students contributed significantly to establishing rigor and developed important tools used in modern mathematical physics. Hilbert is known as one of the founders of proof theory and mathematical logic. 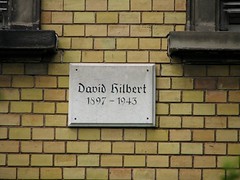 Wilhelm-Weber-Str. 29, Göttingen, Germany where they was