Tobias Mayer (17 February 1723 – 20 February 1762) was a German astronomer famous for his studies of the Moon. He was born at Marbach, in Württemberg, and brought up at Esslingen in poor circumstances. A self-taught mathematician, he earned a living by teaching mathematics while still a youth. He had already published two original geometrical works when, in 1746, he entered J. B. Homann's cartographic establishment at Nuremberg. Here he introduced many improvements in mapmaking, and gained a scientific reputation which led (in 1751) to his election to the chair of economy and mathematics at the University of Göttingen. In 1754 he became superintendent of the observatory, where he worked until his death in 1762. 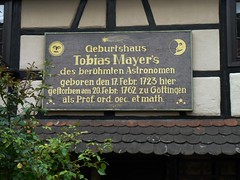 Lange Geismarstr. 49, Göttingen, Germany where they was