James Cook FRS (7 November 1728 – 14 February 1779) was a British explorer, navigator, cartographer, and captain in the British Royal Navy, famous for his three voyages between 1768 and 1779 in the Pacific Ocean and to Australia in particular. He made detailed maps of Newfoundland prior to making three voyages to the Pacific, during which he achieved the first recorded European contact with the eastern coastline of Australia and the Hawaiian Islands, and the first recorded circumnavigation of New Zealand. Cook joined the British merchant navy as a teenager and joined the Royal Navy in 1755. He saw action in the Seven Years' War and subsequently surveyed and mapped much of the entrance to the St. Lawrence River during the siege of Quebec, which brought him to the attention of the Admiralty and the Royal Society. This acclaim came at a crucial moment for the direction of British overseas exploration, and it led to his commission in 1766 as commander of HMS Endeavour for the first of three Pacific voyages. In these voyages, Cook sailed thousands of miles across largely uncharted areas of the globe. He mapped lands from New Zealand to Hawaii in the Pacific Ocean in greater detail and on a scale not previously charted by Western explorers. He surveyed and named features, and recorded islands and coastlines on European maps for the first time. He displayed a combination of seamanship, superior surveying and cartographic skills, physical courage, and an ability to lead men in adverse conditions. Cook was attacked and killed in 1779 during his third exploratory voyage in the Pacific while attempting to kidnap the ruling chief of the island of Hawaiʻi, Kalaniʻōpuʻu, to reclaim a cutter taken from one of his ships after his crew took wood from a burial ground. He left a legacy of scientific and geographical knowledge that influenced his successors well into the 20th century, and numerous memorials worldwide have been dedicated to him. 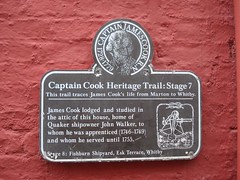 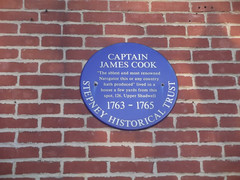 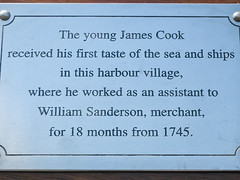 James Cook lodged and studied in the attic of this house, home of Quaker shipowner John Walker, to whom he was apprenticed (1746-1749) and whom he served until 1755.

Captain James Cook "The ablest and most renowned Navigator this or any country hath produced" lived in a house a few yards from this spot, 126, Upper Shadwell 1763-1765

The Highway, Stepney, London, United Kingdom where they lived in a house a few yards from this spot, at 126 Upper Shadwell (1763-1765)

Captain James Cook RN FRS 1728-1779. James Cook, circumnavigator and explorer, attended this school which was founded by Michael Postgate in 1704. Whilst in Great Ayton James Cook lived at Aireyholme Farm on the slopes of Roseberry Topping where his father worked for Thomas Skottowe Lord of the Manor. Cook left Great Ayton in 1745 for Staithes, subsequently becoming apprenticed to John Walker, ship owner of Whitby. This plaque showing the young Cook leaving Great Ayton was executed by Nicholas Dimbleby and erected by the Captain Cook Schoolroom Trust in 1997

The young James Cook received his first taste of the sea and ships in this harbour village, where he worked as an assistant to William Sanderson, merchant, for 18 months from 1745.

Church Street, Staithes, United Kingdom where they was