Elizabeth Cleghorn Gaskell (née Stevenson; 29 September 1810 – 12 November 1865), often referred to as Mrs Gaskell, was an English novelist, biographer and short story writer. Her novels offer a detailed portrait of the lives of many strata of Victorian society, including the very poor, and are of interest to social historians as well as readers of literature. Her first novel, Mary Barton, was published in 1848. Gaskell's The Life of Charlotte Brontë, published in 1857, was the first biography of Brontë. In this biography, she wrote only of the moral, sophisticated things in Brontë’s life; the rest she left out, deciding that certain, more salacious aspects were better kept hidden. Among Gaskell's best known novels are Cranford (1851–53), North and South (1854–55), and Wives and Daughters (1865), each having been adapted for television by the BBC. 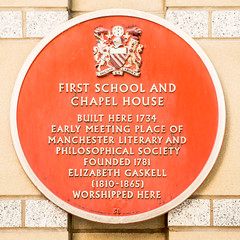 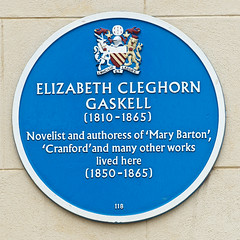 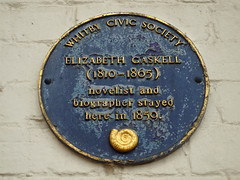 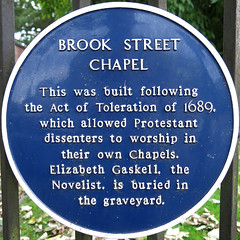 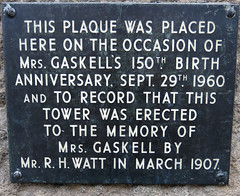 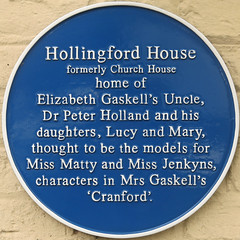 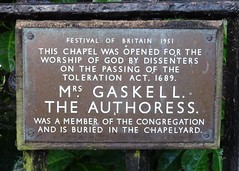 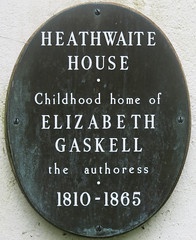 93 Cheyne Walk, Kensington and Chelsea, SW10, London, United Kingdom where they was born (1810)

Brook Street Chapel. This was built following the Act of Toleration of 1689, which allowed Protestant dissenters to worship in their own Chapels. Elizabeth Gaskell, the Novelist, is buried in the graveyard.

This plaque was placed here on the occasion of Mrs. Gaskell's 150th. birth anniversary, Sept. 29th. 1960 and to record that this tower was erected to the memory of Mrs. Gaskell by Mr. R. H. Watt in March 1907

King Street, Knutsford, United Kingdom where they is commemorated

This chapel was opened for the worship of God by dissenters on the passing of the Toleration Act 1689. Mrs Gaskell The Authoress was a member of the congregation and is buried in the chapelyard.

King Street, Knutsford, United Kingdom where they was buried (1865) and worshipped