Little Ireland was a slum district of the township of Manchester in Lancashire, England in the early 19th century, and also the nickname of Cleator Moor in Cumbria. It was inhabited for about 20 years from about 1827 to 1847 and was given its name from the presence of many poor Irish immigrants. It was south of Oxford Road railway station and enclosed by the railway line and the loop in the river. Containing mainly poorly skilled Irish immigrants it became Manchester's oldest, smallest and most short lived Irish slum. In the 1820s the first immigrants moved there, however, by the mid-1840s they were moved on and the area was later demolished to make way for the Manchester South Junction Railway line, which remains there to this day. In his book titled The Condition of the Working Class in England in 1844 socialist writer Friedrich Engels wrote unfavourably about his experience of Little Ireland in Manchester in his book, claiming it was a 'horrid little slum'. the worst of the slums of the township. Little Ireland would become world famous, and the term itself became a generic shorthand for Irish living in slum housing throughout the 19th century industrial world. It is commemorated by a red plaque on 8 Great Marlborough Street, about half-way between New Wakefield Street and Hulme Street. 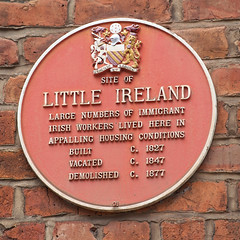