Leeds Civic Hall is a civic building housing Leeds City Council, located in Millennium Square, Leeds, West Yorkshire, England. The design was the result of a competition held in 1926, which was won by Vincent Harris. Work began in 1931 and the hall was opened by King George V on 23 August 1933. Costing £360,000 to construct, it is notable that due to the Great Depression, most people employed in its construction would otherwise have been unemployed, therefore the building's construction was used as job creation, an example of Keynesian economics. The building houses Leeds City Council and includes offices such as the Lord Mayor's room, council chambers and a banqueting hall. Leeds Civic Hall is a Grade II* listed building. In addition to the Civic Hall, Leeds Town Hall is still used for concerts and other functions, as well as housing some council offices. 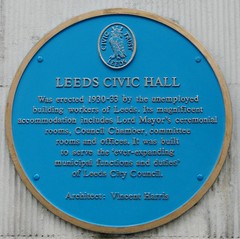