King Edward's School (KES) is an independent day school for boys in the British public school tradition, located in Edgbaston, Birmingham. Founded by King Edward VI in 1552, it is part of the Foundation of the Schools of King Edward VI in Birmingham. It is a member of the Headmasters' and Headmistresses' Conference. As of 2021, King Edward's School was ranked as one of the top 10 International Baccalaureate schools in the United Kingdom and amongst the top 25 in the world. It shares its site and is twinned with King Edward VI High School for Girls (KEHS). Whilst the two schools are managed separately, dramatic arts, societies, music and other events are often shared; the schools also share a couple of hockey pitches and several clubs. The shared area is called Winterbourne after the nearby Winterbourne Botanic Garden. Alumni of the school include two Nobel laureates, J. R. R. Tolkien, author of The Lord of the Rings, and Field Marshal William Slim, 1st Viscount Slim, British military commander in Burma during the Second World War. 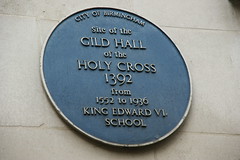