Member of Parliament, British Army Major General, 1st Baronet Tarleton of Liverpool (from 1818), and Knight Grand Cross of the Order of the Bath (from 1820)

Sir Banastre Tarleton, 1st Baronet, GCB (21 August 1754 – 15 January 1833) was a British general and politician. A lieutenant colonel at the end of the American War of Independence, Tarleton did not lead troops into battle again. Tarleton's cavalrymen were called "Tarleton's Raiders". His green uniform was the standard uniform of the British Legion, a provincial unit organised in New York, in 1778. After returning to Great Britain in 1781 at the age of 27, Tarleton was elected a Member of Parliament for Liverpool and returned to office in the early 19th century. As such, Tarleton became a prominent Whig politician despite his young man's reputation as a roué. Tarleton came from a family of slavers, and reflected that during his political career, where he was a prominent opponent of British abolitionists. 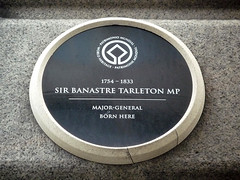