philosopher, Dean of Derry, and Bishop of Cloyne (from 1734)

George Berkeley (/ˈbɑːrkli/; 12 March 1685 – 14 January 1753) – known as Bishop Berkeley (Bishop of Cloyne of the Anglican Church of Ireland) – was an Anglo-Irish philosopher whose primary achievement was the advancement of a theory he called "immaterialism" (later referred to as "subjective idealism" by others). This theory denies the existence of material substance and instead contends that familiar objects like tables and chairs are ideas perceived by the minds and, as a result, cannot exist without being perceived. Berkeley is also known for his critique of abstraction, an important premise in his argument for immaterialism. In 1709, Berkeley published his first major work, An Essay Towards a New Theory of Vision, in which he discussed the limitations of human vision and advanced the theory that the proper objects of sight are not material objects, but light and colour. This foreshadowed his chief philosophical work, A Treatise Concerning the Principles of Human Knowledge, in 1710, which, after its poor reception, he rewrote in dialogue form and published under the title Three Dialogues between Hylas and Philonous in 1713. In this book, Berkeley's views were represented by Philonous (Greek: "lover of mind"), while Hylas ("hyle", Greek: "matter") embodies the Irish thinker's opponents, in particular John Locke. Berkeley argued against Isaac Newton's doctrine of absolute space, time and motion in De Motu (On Motion), published 1721. His arguments were a precursor to the views of Mach and Einstein. In 1732, he published Alciphron, a Christian apologetic against the free-thinkers, and in 1734, he published The Analyst, a critique of the foundations of calculus, which was influential in the development of mathematics. Interest in Berkeley's work increased after World War II because he tackled many of the issues of paramount interest to philosophy in the 20th century, such as the problems of perception, the difference between primary and secondary qualities, and the importance of language. 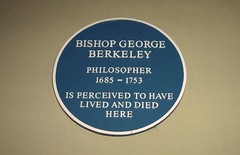 Holywell Street, Oxford, United Kingdom where they is perceived to have lived and died here

30 Bishop Street, Londonderry, United Kingdom where they was