Horatio Herbert Kitchener, 1st Earl Kitchener, KG, KP, GCB, OM, GCSI, GCMG, GCIE, PC (/ˈkɪtʃɪnər/; 24 June 1850 – 5 June 1916) was an Anglo-Irish senior British Army officer and colonial administrator. Kitchener came to prominence for his imperial campaigns, his scorched earth policy against the Boers, his expansion of Lord Roberts' concentration camps during the Second Boer War and his central role in the early part of the First World War. Kitchener was credited in 1898 for having won the Battle of Omdurman and securing control of the Sudan for which he was made Baron Kitchener of Khartoum. As Chief of Staff (1900–1902) in the Second Boer War he played a key role in Lord Roberts' conquest of the Boer Republics, then succeeded Roberts as commander-in-chief – by which time Boer forces had taken to guerrilla fighting and British forces imprisoned Boer civilians in concentration camps. His term as Commander-in-Chief (1902–1909) of the Army in India saw him quarrel with another eminent proconsul, the Viceroy Lord Curzon, who eventually resigned. Kitchener then returned to Egypt as British Agent and Consul-General (de facto administrator). In 1914, at the start of the First World War, Kitchener became Secretary of State for War, a Cabinet Minister. One of the few to foresee a long war, lasting for at least three years, and also having the authority to act effectively on that perception, he organised the largest volunteer army that Britain had seen, and oversaw a significant expansion of materials production to fight on the Western Front. Despite having warned of the difficulty of provisioning for a long war, he was blamed for the shortage of shells in the spring of 1915 – one of the events leading to the formation of a coalition government – and stripped of his control over munitions and strategy. On 5 June 1916, Kitchener was making his way to Russia on HMS Hampshire to attend negotiations with Tsar Nicholas II when in bad weather the ship struck a German mine 1.5 miles (2.4 km) west of Orkney, Scotland, and sank. Kitchener was among 737 who died. 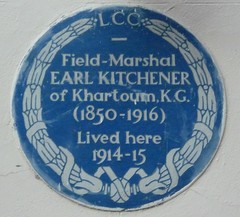