Edith Margaret Garrud (née Williams; 1872–1971) was a British martial artist and suffragist. In 1913 she trained "the Bodyguard", a unit to protect Emmeline Pankhurst, leader of the Women's Social and Political Union (WSPU). Garrud was introduced to jujutsu in 1899 alongside her husband William. They studied under Sadakazu Uyenishi and later opened their own London dojo. Edith became the first British female teacher of jujutsu, and one of the first female martial arts instructors in the Western world. As a supporter of women's suffrage, Garrud joined the Women's Freedom League in 1906. Edith and William Garrud continued to work as self-defence and jujutsu instructors until 1925, when they sold their school. She was featured as the protagonist in a short film entitled The Lady Athlete, or Jiu-jitsu Downs the Footpads in 1907. 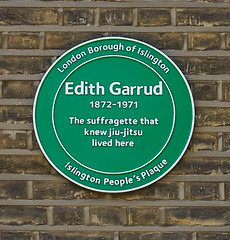 60 Thornhill Square, N1 1BE, London, United Kingdom where they lived