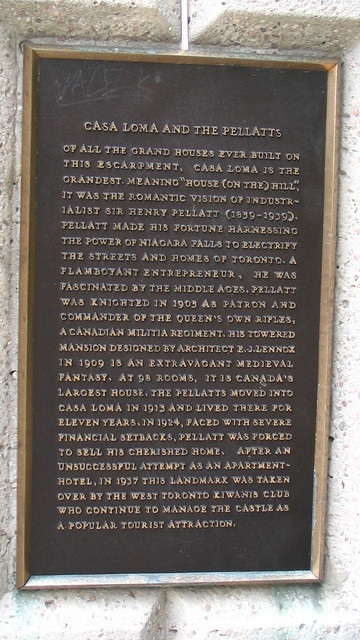 Casa Loma Stables In 1905 Sir Henry Pellatt purchased land which had been the private g...
Toronto, ON, Canada

Casa Loma and the Pellatts Of all the grand houses ever built on this escarpment, Casa Loma is the grandest. Meaning "House (on the) Hill", it was the romantic vision of the industrialist Sir Henry Pellatt (1859-1939). Pellatt made his fortune harnessing the power of Niagara Falls to electrify the streets and homes of Toronto. A flamboyant entrepreneur, he was fascinated by the Middle Ages. Pellatt was knighted in 1905 as patron and commander of the Queen's Own Rifles, a Canadian militia regiment. His towered mansion designed by architect E.J. Lennox in 1909 is an extravagant medieval fantasy. At 98 rooms, it is Canada's largest house. The Pellatts moved into Casa Loma in 1913 and lived there for eleven years. In 1924, faced with severe financial setbacks, Pellatt was forced to sell his cherished home. After an unsuccessful attempt as an apartment-hotel, in 1937 this landmark was taken over by the West Toronto Kiwanis Club who continue to manage the castle as a popular tourist attraction.

Baldwin Steps, Toronto, ON, Canada where they designed

Casa Loma Stables In 1905 Sir Henry Pellatt purchased land which had been the private golf course of Albert Austin of nearby Spadina. The following year, anticipating construction of Casa Loma, he hired E. J. Lennox to design and build these stables, estimated to have cost $250,000. The stalls were made of Spanish mahogany and the floors were covered in tiles set in a zig-zag pattern so that the horses would not slip. When the main castle was completed, it was connected to the stables by a tunnel. Here, in 1944, in utmost secrecy, the Royal Navy placed an assembly plant for ASDIC, an early form of sonar which was vital in the battles of the Atlantic. The existence of this factory was disclosed only after the Second World War had ended.