George Wild Galvin (20 December 1860 – 31 October 1904), better known by the stage name Dan Leno, was a leading English music hall comedian and musical theatre actor during the late Victorian era. He was best known, aside from his music hall act, for his dame roles in the annual pantomimes that were popular at London's Theatre Royal, Drury Lane, from 1888 to 1904. Leno was born in St Pancras, London, and began to entertain as a child. In 1864, he joined his parents on stage in their music hall act, and he made his first solo appearance, aged nine, at the Britannia Music Hall in Coventry. As a youth, he was famous for his clog dancing, and in his teen years, he became the star of his family's act. He adopted the stage name Dan Leno and, in 1884, made his first performance under that name in London. As a solo artist, he became increasingly popular during the late 1880s and 1890s, when he was one of the highest-paid comedians in the world. He developed a music hall act of talking about life's mundane subjects, mixed with comic songs and surreal observations, and created a host of mostly working-class characters to illustrate his stories. In 1901, still at the peak of his career, he performed his "Huntsman" sketch for Edward VII at Sandringham. The monarch was so impressed that Leno became publicly known as "the king's jester". Leno also appeared in burlesque and, every year from 1888 to 1904, in the Drury Lane Theatre's Christmas pantomime spectacles. He was generous and active in charitable causes, especially to benefit performers in need. Leno continued to appear in musical comedies and his own music hall routines until 1902, although he suffered increasingly from alcoholism. This, together with his long association with dame and low comedy roles, prevented him from being taken seriously as a dramatic actor, and he was turned down for Shakespearean roles. Leno began to behave in an erratic and furious manner by 1902, and he suffered a mental breakdown in early 1903. He was committed to a mental asylum, but was discharged later that year. After one more show, his health declined, and he died aged 43. 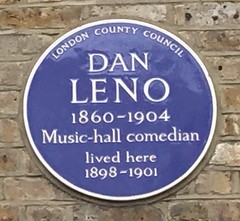