Ketley's Building Society, founded in Birmingham, England, in 1775, was the world's first building society. The society was formed by Richard Ketley, the landlord at the Golden Cross inn at 60 Snow Hill. Taverns and coffeehouses were important meeting places in eighteenth century Birmingham and frequently formed the focal point for clubs and societies. Ketley's Building Society existed to pool the resources of its members, who would contribute a specified amount into a shared building fund and draw lots to select which of the members would have land purchased and a home constructed. With property in place as security, further finance could be attracted to the society through loans at a reasonable cost. The only documentary records of the society are three advertisements offering shares in the society that appeared in local newspapers in 1778 and 1779. The third of these advertisements claimed that £80 had been advanced on the society's shares. 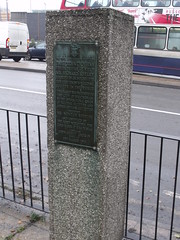 On this site formerly stood The Golden Cross Inn the prorietor of which Mr. Richard Ketley founded in or before 1775 the first known building society in the world. This plaque was presented to the City of Birmingham by the International Union of Building Societies and Savings and Loan Associations. President Mr. Morton Bodfish and unveiled by the right worshipful the Lord Mayor of Birmingham Alderman John Joseph Grogan M.B.B.. J.P. 28th March 1958