Saint Alban (/ˈɔːlbən, ˈæl-/; Latin: Albanus) is venerated as the first recorded British Christian martyr, and is considered to be the British protomartyr. Along with his fellow saints "Amphibalus," Julius, and Aaron, Alban is one of four named martyrs recorded from Roman Britain. He is traditionally believed to have been beheaded in the Roman city of Verulamium (modern St Albans) sometime during the 3rd or 4th century, and his cult has been celebrated there since ancient times. 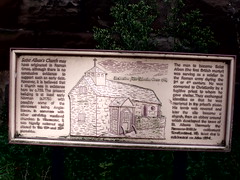 Saint Alban's Church may have originated in Roman times, although there is no conclusive evidence to support such an early date. However, it is believed that a church was in existence here by c. 720. The present building is at least early Norman (c.1175) with possibly some of the stonework being Anglo-Saxon. In common with other surviving medieval churches in Worcester, it was heavily restored and altered in the 19th and 20th centuries. The man to become Saint Alban (the first British Martyr) was serving as a soldier in the Roman army during the 3rd or 4th century. He was converted to Christianity by a fugitive priest to whom he gave shelter. They exchanged identities so that he was martyred in the priest's place. His tomb was revered and later became a church, then an abbey around which developed the town of St. Alban's (formerly the Romano-British settlement Verulamium). His feast day is celebrated on June 22nd.