Muzio Filippo Vincenzo Francesco Saverio Clementi (23 January 1752 – 10 March 1832) was an Italian-born English composer, pianist, pedagogue, conductor, music publisher, editor, and piano manufacturer. Encouraged to study music by his father, he was sponsored as a young composer by Sir Peter Beckford who took him to England to advance his studies. Later, he toured Europe numerous times from his long-standing base in London. It was on one of these occasions, in 1781, that he engaged in a piano competition with Wolfgang Amadeus Mozart. Influenced by Domenico Scarlatti's harpsichord school and Haydn's classical school and by the stile Galante of Johann Christian Bach and Ignazio Cirri, Clementi developed a fluent and technical legato style, which he passed on to a generation of pianists, including John Field, Johann Baptist Cramer, Ignaz Moscheles, Giacomo Meyerbeer, Friedrich Kalkbrenner, Johann Nepomuk Hummel and Carl Czerny. He was a notable influence on Ludwig van Beethoven and Frédéric Chopin. Clementi also produced and promoted his own brand of pianos and was a notable music publisher. Because of this activity, many compositions by Clementi's contemporaries and earlier artists have stayed in the repertoire. Though the reputation of Clementi was exceeded only by Haydn, Beethoven and Rossini in his day, his popularity languished for much of the 19th and 20th centuries. 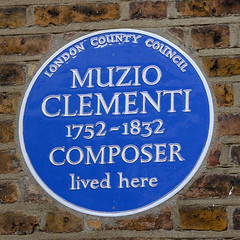