John Russell, 1st Earl Russell, KG, GCMG, PC, FRS (18 August 1792 – 28 May 1878), known by his courtesy title Lord John Russell before 1861, was a British Whig and Liberal statesman who served as Prime Minister of the United Kingdom from 1846 to 1852 and again from 1865 to 1866. The third son of the 6th Duke of Bedford, Russell was educated at Westminster School and Edinburgh University before entering Parliament in 1813. In 1828 he took a leading role in the repeal of the Test Acts which discriminated against Catholics and Protestant dissenters. He was one of the principal architects of the Reform Act 1832, which was the first major reform of Parliament since the Restoration, and a significant early step on the road to democracy and away from rule by the aristocracy and landed gentry. He favoured expanding the right to vote to the middle classes and enfranchising Britain's growing industrial towns and cities but he never advocated universal suffrage and he opposed the secret ballot. Russell was outspoken on many issues over the course of his career, advocating Catholic emancipation in the 1820s, calling for the repeal of the Corn Laws in 1845, denouncing Pope Pius IX's revival of Catholic bishoprics in 1850, and supporting Italian unification during the 1860s. Russell's ministerial career spanned four decades. In addition to his two terms as prime minister, between 1831 and 1865 he served in the cabinets of Earl Grey, Viscount Melbourne, the Earl of Aberdeen, and Viscount Palmerston. Russell's relationship with Palmerston was often stormy and contributed to bringing down Russell's first government in 1852 and Palmerston's first government in 1858. However, their renewed alliance from 1859 was one of the foundations of the united Liberal Party, which would go on to dominate British politics in the following decades. While Russell was an energetic and effective minister during the 1830s and helped to commit the Whigs to a reform agenda, he proved less successful as prime minister. During his two periods as prime minister he often suffered from a disunited cabinet and weak support in the House of Commons, meaning he was unable to carry out much of his agenda. During his first premiership, his government failed to deal effectively with the Irish Famine, a disaster that saw the loss of a quarter of Ireland's population through death and emigration. During his second premiership, he split his party by pressing for further parliamentary reform and was forced from office only to watch Derby and Disraeli carry a more ambitious Reform Bill. It has been said that Russell's ministry of 1846–1852 was the ruin of the old Whig party and that his ministry of 1865–1866 was very nearly the ruin of the Liberal Party that took its place. 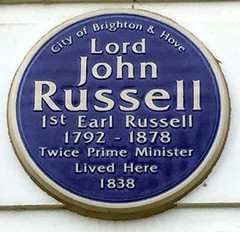 , Brighton, United Kingdom where they lived (1838)