operatic tenor and freeman of Limerick

Joseph O'Mara (16 July 1864 – 5 August 1927) was an Irish opera singer of the Victorian and Edwardian eras. After studying opera in Milan, Italy, he made his London stage debut in 1891 in the tenor title role of the opera Ivanhoe by Arthur Sullivan and soon appeared in other operas. In 1894 he first appeared at Covent Garden Theatre. For three years, he was the principal tenor at Theatre Royal, Drury Lane, also appearing in the pantomime there and elsewhere. In 1896, he created the tenor lead, Mike Murphy, in Charles Villiers Stanford's opera Shamus O'Brien, also playing the role on tour and in America. After a series of concert engagements in London, O'Mara travelled again to America to create the tenor lead in Reginald De Koven's The Highwayman. He was a leading tenor with the Moody-Manners Opera Company in London from 1902 to 1908, also performing extensively in Ireland with the company. O'Mara was granted the Freedom of the City of Limerick in 1908, the only time that a singer achieved this honour. In 1908, in Patrick Bidwell's musical Peggy Machree on Broadway in New York City. In 1909, O'Mara returned to Britain and joined the Thomas Beecham Company, singing tenor leads over the next few years, while also continuing to perform in concerts. In 1912, he founded O'Mara's Travelling Opera Company, in which he was the principal tenor until his farewell performance as Lohengrin in 1926. In all, O'Mara sang 67 tenor roles. In 1926, he was the first tenor to broadcast in Ireland. 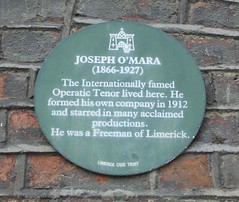 Joseph O'Mara (1866 - 1927) the internationally famed Operatic Tenor lived here. He formed his own company in 1912 and starred in many acclaimed productions. He was a Freeman of Limerick.