Lancelot Brown (born c. 1715–16, baptised 30 August 1716 – 6 February 1783), more commonly known as Capability Brown, was an English gardener and landscape architect, who remains the most famous figure in the history of the English landscape garden style, which was to sweep over Europe. He is remembered as "the last of the great English 18th-century artists to be accorded his due" and "England's greatest gardener", although there have always been critics of his style. Unlike William Kent, he was both a hands-on gardener to his fingertips, and provided his clients with a full turnkey service, designing the gardens and park, and then managing their landscaping and planting. He is most famous for the landscaped parks of English country houses, many of which have survived reasonably intact, but it is now recognised that he was perfectly ready to include in his plans "pleasure gardens" with flower gardens and the new shrubberies, usually placed where they would not obstruct the views across the park of and from the main facades of the house. However, little of his plantings of "pleasure gardens" has survived later changes. He also submitted plans for much smaller urban projects, for example the college gardens along The Backs at Cambridge. Criticism of his style, both in his own day and subsequently, mostly centres on the claim that "he created 'identikit' landscapes with the main house in a sea of turf, some water, albeit often an impressive feature, and trees in clumps and shelterbelts", giving "a uniformity equating to authoritarianism", and showing a lack of imagination and even taste on the part of his patrons. He designed over 170 parks, many of which survive. He was nicknamed "Capability" because he would tell his clients that their property had "capability" for improvement. His influence was so great that the contributions to the English garden made by his predecessors Charles Bridgeman and William Kent are often overlooked; even Kent's champion Horace Walpole allowed that Kent "was succeeded by a very able master". 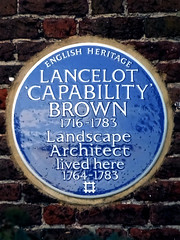 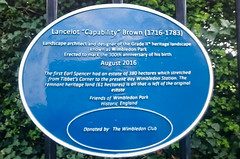 Lancelot “Capability" Brown (1716 to 1783) Landscape architect and designer of the Grade II* heritage landscape known as Wimbledon Park Erected to mark the 300th anniversary of his birth August 2016 The first Earl Spencer had an estate of 380 hectares which stretched from Tibbet’s Corner to the present day Wimbledon Station. The remnant heritage land (61 hectares) is all that is left of the original estate Friends of Wimbledon Park Historic England

Church Road, Wimbledon, London, United Kingdom where they was