The Lunar Society of Birmingham was a British dinner club and informal learned society of prominent figures in the Midlands Enlightenment, including industrialists, natural philosophers and intellectuals, who met regularly between 1765 and 1813 in Birmingham. At first called the Lunar Circle, "Lunar Society" became the formal name by 1775. The name arose because the society would meet during the full moon, as the extra light made the journey home easier and safer in the absence of street lighting. The members cheerfully referred to themselves as "lunaticks", a pun on lunatics. Venues included Erasmus Darwin's home in Lichfield, Matthew Boulton's home, Soho House, Bowbridge House in Derbyshire, and Great Barr Hall. 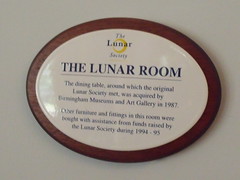 The Lunar Room The dining table, around which the original Lunar Society met, was acquired by Birmingham Museums and Art Gallery in 1987. Other furniture and fittings in this room were bought with assistance from funds raised by the Lunar Society during 1994 - 95

The Lunar Room, Soho House, Birmingham, United Kingdom where it was