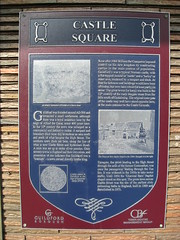 Castle Square Guildford was founded around AD 500 and remained a small settlement, although there was a royal residence here by the reign of Alfred the Great, some 400 years later. In the 16th century the town was enlarged as a commercial and defensive centre. A rampart and boundary ditch were dug to enclose an area north and south of what became the High Street. The southern town ditch ran here, along the line of what is now Castle Street and Sydenham Road. A mint was set up to strike silver pennies. Only seventy towns in England had their own mints, and possession of one indicates that Guildford was a 'borough' - a town owned directly by the king. Soon after 1066 William the Conqueror imposed control on his new kingdom by constructing castles in the main centres of population. Guildford's was a typical Norman castle, with a flat-topped mound or "motte" and a bailey or outer area, enclosed by a rampart and ditch. At first the defences and buildings would have been of timber, but were later rebuilt (at least partly) in stone. The great tower (or keep) was built in the 12th century from the rusty Bargate stone from the hills south of Godalming. The original outer gate of the castle may well have stood opposite here, at the main entrance to the Castle Grounds. Tunsgate, the street leading to the High Street through the arch of the former Cornmarket, was once the passageway leading through the Tun Inn. It was widened in the 1930s to take motor traffic. Until 1954 the 'Charcoal Barn' Baptist chapel stood on this spot. The green lawn across Castle Street was the site of the earliest civic swimming baths in England, built in 1889 and demolished in 1971.