Ernest Henry "Chinese" Wilson (15 February 1876 – 15 October 1930), better known as E. H. Wilson, was a notable British plant collector and explorer who introduced a large range of about 2000 Asian plant species to the West; some sixty bear his name. 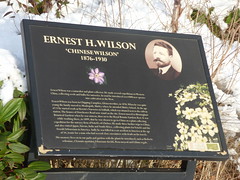 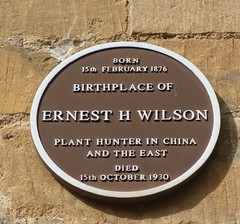 Ernest H. Wilson 'Chinese Wilson' 1876-1930 Ernest Wilson was a naturalist and plant collector. He made several expeditions to Western China, collecting seeds and bulbs for nurseries. In total he introduced over 1000 new species into cultivation in the West. Ernest Wilson was born in Chipping Campden, Gloucestershire, in 1876. When he was quite young the family moved to Monkspath, Shirley where he attended Shirley School. At the age of 13 he started work at Hewitt's Nurseries in Solihull, which was situated next to the railway station. The houses of Dorcester Road now stand on the site. Ernest moved to Birmingham Botanical Gardens when he was sixteen, then on to the Royal Botanic Gardens Kew. It was while working there, in 1899, that he was chosen to go to China on a plant collecting expedition for the nursery firm of Veitch's of Chelsea. He made three further trips to China, and also visited Japan, Taiwan, India and South Africa, collecting plants for Veitch's and the Arnold Arboretum in America. Sadly he was killed in a car accident in America at the age of 54, ironic for a man who had several close encounters with death on his travels. His memory lives on in our parks and gardens with plants he introduced, such as Berberis wilsoniae, Clematis montana, Viburnum davidii, Rosa moyesii and Lilium regale.

Malvern Park, Solihull, United Kingdom where they lived near