Thomas Lanier Williams III (March 26, 1911 – February 25, 1983), known by his pen name Tennessee Williams, was an American playwright and screenwriter. Along with contemporaries Eugene O'Neill and Arthur Miller, he is considered among the three foremost playwrights of 20th-century American drama. At age 33, after years of obscurity, Williams suddenly became famous with the success of The Glass Menagerie (1944) in New York City. This play closely reflected his own unhappy family background. It was the first of a string of successes, including A Streetcar Named Desire (1947), Cat on a Hot Tin Roof (1955), Sweet Bird of Youth (1959), and The Night of the Iguana (1961). With his later work, Williams attempted a new style that did not appeal as widely to audiences. His drama A Streetcar Named Desire is often numbered on short lists of the finest American plays of the 20th century alongside Eugene O'Neill's Long Day's Journey into Night and Arthur Miller's Death of a Salesman. Much of Williams's most acclaimed work has been adapted for the cinema. He also wrote short stories, poetry, essays and a volume of memoirs. In 1979, four years before his death, Williams was inducted into the American Theater Hall of Fame. 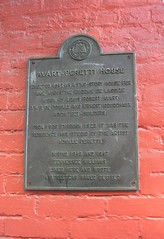 Avart-Peretti House erected 1842 as a two-story house for Mme. Augustine Eugenie of Lassize widow of Louis Robert Avart J.N.B. de Pouilly and Ernest Gouuchaux architect-builders. From 1906 through 1923 it was the residence and studio of the artist Achille Peretti. During 1946 and 1947 Tennessee Williams lived here and wrote 'A Streetcar Named Desire'

First home of Tennessee Williams. One of America's leading playwrights Tennessee Williams was born here March 26 1911. He received the Pulitzer Prize for 'Streetcar Named Desire' and 'Cat On A Hot Tin Roof.' Both stories set in the South.