soldier, Polish Army General, and Prime Minister of the Polish Government in Exile (1939-1943) 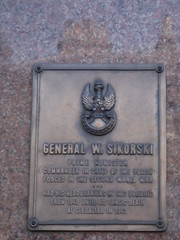 General W. Sikorski Prime Minister, commander in chief of the Polish forces in the Second World War, had his headquarters in this building from 1940 until his tragic death at Gibraltar in 1943

General Wladyslaw Sikorski (1881 – 1943) “The rivers of Polish tears and blood” the General said, “will not be shed in vain. Providence has brought us to Great Britain. In these fateful days we stand by Great Britain until victory brings a reconstruction of Europe” General Sikorski, the Polish Prime Minister and Commander-in-Chief was an outstanding soldier and statesman whose democratic reforms won him the respect and affections of the Polish People. In 1940 the Polish Army had just been evacuated from France and was to be reorganised in Scotland to prepare for the German invasion. Sikorski visited Biggar in August 1940 to review the Polish troops stationed in the district. From a platform erected in the High Street, he reviewed the Polish troops on the march past in honour.