Coconino County is a county in the north-central part of the U.S. state of Arizona. Its population was 145,101 at the 2020 census. The county seat is Flagstaff. The county takes its name from Cohonino, a name applied to the Havasupai people. It is the second-largest county by area in the contiguous United States, behind San Bernardino County, California. It has 18,661 sq mi (48,300 km2), or 16.4% of Arizona's total area, and is larger than each of the nine smallest states in the U.S. Coconino County comprises the Flagstaff metropolitan statistical area, Grand Canyon National Park, the federally recognized Havasupai Nation, and parts of the federally recognized Navajo, Hualapai, and Hopi nations. As a result, its relatively large Native American population makes up nearly 30% of the county's total population; it is mostly Navajo, with smaller numbers of other tribes. The county was the setting for George Herriman's early 20th-century Krazy Kat comic strip. 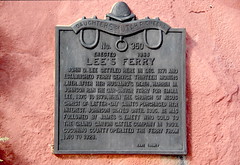 Lee's Ferry John D. Lee settled here in Dec. 1871 and established ferry service thirteen months later. After her husband's death, Warren M. Johnson ran the oar-driven ferry for Emma Lee, 1875 to 1879, when the Church of Jesus Christ of Latter-Day Saints purchased her interest. Johnson served until 1895. He was followed by James S. Emett who sold to the Grand Canyon Cattle Company in 1909. Coconino County operated the ferry from 1910 to 1928.