James Larkin (28 January 1874 – 30 January 1947), sometimes known as Jim Larkin, was an Irish republican, socialist and trade union leader. He was one of the founders of the Irish Labour Party along with James Connolly and William O'Brien, and later the founder of the Irish Worker League (a communist party which was recognised by the Comintern as the Irish section of the world communist movement), as well as the Irish Transport and General Workers' Union (ITGWU) and the Workers' Union of Ireland (the two unions later merged to become SIPTU, Ireland's largest trade union). Along with Connolly and Jack White, he was also a founder of the Irish Citizen Army (ICA; a paramilitary group which was integral to both the Dublin lock-out and the Easter Rising). Larkin was a leading figure in the Syndicalist movement. Larkin was born to Irish parents in Liverpool, England. Growing up in poverty, he received little formal education and began working in a variety of jobs while still a child. He became a full-time trade union organiser in 1905. Larkin moved to Belfast in 1907, where he was involved in trade unionism and syndicalist strike action including organising the 1907 Belfast Dock strike. Larkin later moved south and organised workers in Dublin, Cork and Waterford, with considerable success. He founded the Irish Transport and General Workers' Union after his expulsion from the National Union of Dock Labourers for his taking part in strike action in Dublin against union instructions, this new union would quickly replace the NUDL in Ireland. He later moved to Dublin which would become the headquarters of his union and the focus of his union activity, as well as where the Irish Labour Party would be formed. He is perhaps best known for his role in organising the 1913 strike that led to the Dublin lock-out. The lock-out was an industrial dispute over workers pay and conditions as well as their right to organise, and received world-wide attention and coverage. It has been described as the "coming of age of the Irish trade union movement". The Irish Citizen Army was formed during the lock-out to protect striking workers from police violence. Not long after the lockout Larkin assumed direct command of the ICA, beginning the process of its reform into a revolutionary paramilitary organisation by arming them with Mauser rifles bought from Germany by the Irish Volunteers and smuggled into Ireland at Howth in July 1914. In October 1914 Larkin left Ireland and travelled to America to raise funds for the ITGWU and the ICA, leaving Connolly in charge of both organisations. During his time in America, Larkin became involved in the socialist movement there, becoming a member of the Socialist Party of America. Larkin then became involved in the early communist movement in America, and he was later jailed in 1920 in the midst of the Red Scare after being found guilty of 'criminal anarchy'. He then spent several years at Sing Sing, before he was eventually pardoned by the Governor of New York Al Smith in 1923 and later deported. Larkin then returned to Ireland where he again became involved in Irish socialism and politics, both in the Labour Party and then his newly formed Irish Worker League. Connolly by this time had been executed for his part in the Easter Rising and Larkin mourned the passing of his friend and colleague. Larkin also formed the Workers' Union of Ireland (WUI) after he lost control of the ITGWU, the WUI was affiliated to Red International of Labour Unions (Promintern) soon after its formation. Larkin served as a Teachta Dála on three occasions, and two of his sons (James Larkin Jnr and Denis Larkin) also served as Teachta Dála. Jim Larkin served as Labour Party deputy in Dáil Éireann from 1943 to 1944, leaving Dáil Éireann for the last time in 1944, and dying in Dublin in 1947. Catholic Archbishop of Dublin John Charles McQuaid gave his funeral mass, and the ICA in its last public appearance escorted his funeral procession through Dublin to his burial site at Glasnevin Cemetery. Larkin was respected by commentators both during and after his lifetime, with George Bernard Shaw describing him as the "greatest Irishman since Parnell", his friend and colleague in the labour movement James Connolly describing him as a "man of genius, of splendid vitality, great in his conceptions, magnificent in his courage", and Vladimir Lenin noting him as 'a remarkable speaker and a man of seething energy [who] performed miracles amongst the unskilled workers'. However other commentators have noted that Larkin was "vilified as a wrecker by former comrades", with anthologist Donal Nevin noting that some of Larkin's actions, including his attacks on others in the labour movement, meant Larkin had "alienated practically all the leaders of the movement [and] the mass of trade union members" by the mid-1920s. "Big Jim" Larkin continues to occupy a position in Dublin's collective memory and streetscape, with a statue of him unveiled on O'Connell Street in 1979. 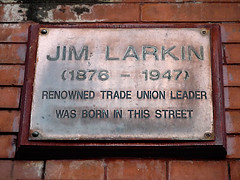 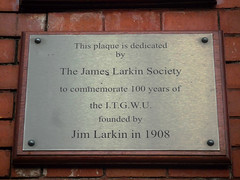 The Globe, Combermere Street, Liverpool, United Kingdom where they was born (1876)

This plaque is dedicated by The James Larkin Society to commemorate 100 years of the I.T.G.W.U. founded by Jim Larkin in 1908

The Globe, Combermere Street, Liverpool, United Kingdom where they was