Constantine Peter Cavafy (/kəˈvɑːfi/; also known as Konstantinos Petrou Kavafis; Greek: Κωνσταντίνος Π. Καβάφης [ka'vafis]; April 29 (April 17, OS), 1863 – April 29, 1933) was a Greek poet, journalist and civil servant from Alexandria. His work, as one translator put it, "holds the historical and the erotic in a single embrace." Cavafy's friend E. M. Forster, the novelist and literary critic, introduced his poems to the English-speaking world in 1923, famously describing him as "a Greek gentleman in a straw hat, standing absolutely motionless at a slight angle to the universe." Cavafy's consciously individual style earned him a place among the most important figures not only in Greek poetry, but in Western poetry as a whole. Cavafy wrote 155 poems, while dozens more remained incomplete or in sketch form. During his lifetime, he consistently refused to formally publish his work and preferred to share it through local newspapers and magazines, or even print it out himself and give it away to anyone interested. His most important poems were written after his fortieth birthday, and officially published two years after his death. 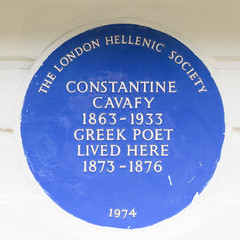 14–15 Queensborough Terrace, Bayswater, W2, London, United Kingdom where they was