director of many famous British films including Brief Encounter, Commander of the Most Excellent Order of the British Empire, and Knight Bachelor (from 1984)

Sir David Lean CBE (25 March 1908 – 16 April 1991) was an English film director, producer, screenwriter and editor. Widely considered one of the most influential directors of all time, Lean directed the large-scale epics The Bridge on the River Kwai (1957), Lawrence of Arabia (1962), Doctor Zhivago (1965), and A Passage to India (1984). He also directed two adaptations of Charles Dickens novels, Great Expectations (1946) and Oliver Twist (1948), as well as the romantic drama Brief Encounter (1945). Originally a film editor in the early 1930s, Lean made his directorial debut with 1942's In Which We Serve, which was the first of four collaborations with Noël Coward. Beginning with Summertime in 1955, Lean began to make internationally co-produced films financed by the big Hollywood studios; in 1970, however, the critical failure of his film Ryan's Daughter led him to take a fourteen-year break from filmmaking, during which he planned a number of film projects which never came to fruition. In 1984 he had a career revival with A Passage to India, adapted from E. M. Forster's novel; it was an instant hit with critics but proved to be the last film Lean would direct. Lean's affinity for pictorialism and inventive editing techniques has led him to be lauded by directors such as Steven Spielberg, Stanley Kubrick, Martin Scorsese, and Ridley Scott. Lean was voted 9th greatest film director of all time in the British Film Institute Sight & Sound "Directors' Top Directors" poll in 2002. Nominated seven times for the Academy Award for Best Director, which he won twice for The Bridge on the River Kwai and Lawrence of Arabia, he has seven films in the British Film Institute's Top 100 British Films (with three of them being in the top five) and was awarded the AFI Life Achievement Award in 1990. 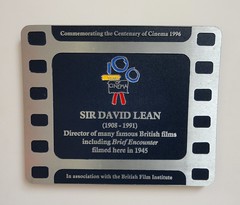 38 Blenheim Crescent, Croydon, United Kingdom where they was born (1908)