composer, pianist, creator of the nocturne, and precursor of Chopin

John Field (26 July 1782 – 23 January 1837), was an Irish pianist, composer, and teacher. Field is best known as the inventor of the nocturne, but there is evidence to suggest that this is a posthumous accolade. He is mentioned in passing in War and Peace when Countess Rostova calls on the Rostov household musician to play her favourite nocturne. He was born in Dublin into a musical family, and received his early education there, in particular with the immigrant Tommaso Giordani. The Fields soon moved to London, where Field studied under Muzio Clementi. Under his tutelage, Field quickly became a famous and sought-after concert pianist. Together, master and pupil visited Paris, Vienna, and St. Petersburg. Ambiguity surrounds Field's decision to remain in the former Russian capital, but it is likely that Field acted as a sales representative for the Clementi Pianos. Field was very highly regarded by his contemporaries and his playing and compositions influenced many major composers, including Frédéric Chopin, Johannes Brahms, Robert Schumann, and Franz Liszt. Although little is known of Field in Russia, he undoubtedly contributed substantially to concerts and teaching, and to the development of the Russian piano school. Notable students include Prussian pianist and composer Charles Mayer, the Franco-Russian composer Alexandre Dubuque, and Polish pianist and composer Antoine de Kontski. See: List of music students by teacher: C to F#John Field. 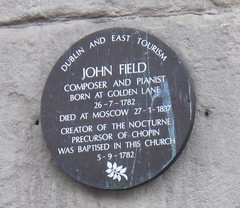 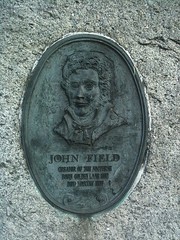 John Field composer and pianist born at Golden Lane 26th July 1782 died at Moscow 27th January 1837. Creator of the nocturne, precursor of Chopin, was baptised in this church 5th September 1782

Golden Lane, Dublin 2, Dublin, Ireland where they was