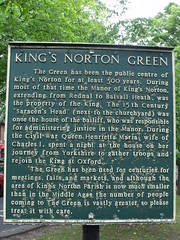 King's Norton Green, Birmingham, United Kingdom where it was