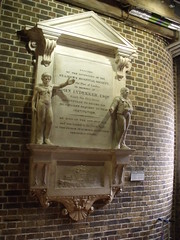 Erected by the Governor of the Seamen's Hospital Society, the Port of London. In memory of John Lydekker, Esq.r South Sea Ship Owner. Gratefully to record his munificent bequest to that institution. He died on the 23rd July 1832, and was burried in the North Vault of the Church of St Dionis, Backchurch, Fenchurch Street.