Francis Edward Ledwidge (19 August 1887 – 31 July 1917) was an Irish poet from Slane, County Meath, sometimes known as the "poet of the blackbirds". He was later also known as a First World War war poet. He was killed in action in 1917. Born to a poor family in Slane, County Meath, Ledwidge started writing at an early age, and was first published in a local newspaper at the age of 14. Finding work as a labourer and miner, he was also a trade union activist, and a keen patriot and nationalist, associated with Sinn Féin. He became friendly with a local landowner, the writer Lord Dunsany, who gave him a workspace in the library of Dunsany Castle, and introduced him to literary figures including William Butler Yeats and Katherine Tynan, with whom he had a long-term correspondence. He was elected to a local government post and helped organise the local branch of the Irish Volunteers, while Dunsany edited a first volume of his poetry and helped him secure publication for it. Despite having sided with the faction of the Irish Volunteers which opposed participation in the war, he enlisted in the Royal Inniskilling Fusiliers in October 1914, and continued to write poetry on campaign, sending work to Lord Dunsany and to family and other friends. Having been posted to several theatres of the war, he was killed in action in July 1917 during the Battle of Passchendaele. Dunsany arranged for the publication of more of his poems, and a collected edition of 122 poems in 1919. Some musical settings of his work were also composed. Further poems, from the archives at Dunsany Castle and some material held by families of relatives and friends, were published by Ledwidge's biographer, Alice Curtayne, in 1974, and by one of the two Ledwidge memorial groups, in 1997. A museum of his life and work was opened in his birthplace cottage in 1982. Ledwidge was selected as one of twelve prominent war poets - and the only Irish one - for the exhibition Anthem for Doomed Youth at the Imperial War Museum in London in 2002, and memorialised at an event in Inchicore, Dublin, in 2017, with his work set to music by Anúna. Some of his manuscripts are held in the National Library of Ireland and more in the archives of Dunsany Castle. 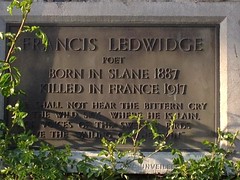 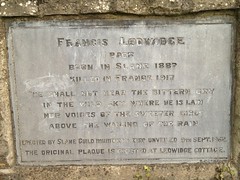 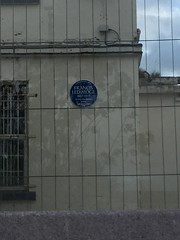 Francis Ledwidge poet born in Slane 1887 killed in France 1917. He shall not hear the bittern cry in the wild sky, where he is lain, Nor voices of the sweeter birds above the wailing of the rain

Francis Ledwidge poet born in Slane 1887 killed in France 1917. He shall not hear the bittern cry in the wild sky where he is lain, nor voices of the sweeter birds above the wailing of the rain. The original plaque is erected at Ledwidge Cottage

Slane Bridge, Slane, Ireland where they was

Ebrington Square, Londonderry, United Kingdom where they was stationed (1916)