Edouard Espinosa (1871–1950) was co-founder and Principal Examiner of the Association of Operatic Dancing. Born in Moscow - the son of Léon Espinosa and Mathilda Oberst. He married Eve Louise Kelland, and had two children Edward Kelland-Espinosa and Yvette Espinosa. In addition to performing, Espinosa worked with his father, Léon Espinosa, producing and choreographing for music hall, pantomime and plays throughout Britain and abroad. He was particularly adept at teaching and analysing steps and subsequently became Maitre de Ballet for Royal Opera House in Covent Garden, The Empire, The Alhambra and theatres in Paris, Berlin and New York. He married Eve Louise Kelland, Espinosa codified the steps his father taught. This code became the basis for the first structured syllabus of its kind to be devised internationally. Edouard's brothers (Marius and Leo) and his three sisters (Judith, Ray and Lea Espinosa) all became dancers and teachers. When he broke away from the Association of Operatic Dancing, many of his students had become prominent teachers in various parts of the British Isles and they formed the nucleus of the British Ballet Organization. Over the years, the Organisation expanded, offering a syllabus and examinations in dance. It extended its influence to South Africa, Australia, New Zealand and India as well as all over the British Isles. Espinosa taught many who would go on to have successful careers including Dame Ninette de Valois, who in turn taught Celia Franca, the founder of the National Ballet of Canada. Espinosa's book The elementary technique of operatic dancing was published in 1928 and was originally called the Syllabus of elementary technique as explained by Espinosa 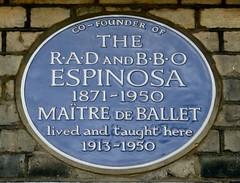