Alfred Wainwright MBE (17 January 1907 – 20 January 1991), who preferred to be known as A. Wainwright or A.W., was a British fellwalker, guidebook author and illustrator. His seven-volume Pictorial Guide to the Lakeland Fells, published between 1955 and 1966 and consisting entirely of reproductions of his manuscript, has become the standard reference work to 214 of the fells of the English Lake District. Among his 40-odd other books is the first guide to the Coast to Coast Walk, a 192-mile long-distance footpath devised by Wainwright which remains popular today. 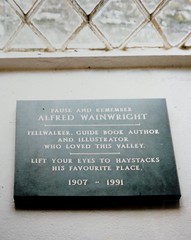 The birthplace of Alfred Wainwright author and fell walker (1907-1991)

331 Audley Range, Blackburn, United Kingdom where they was born (1907)

Pause and remember Alfred Wainwright. Fellwalker, guide book author and illustrator who loved this valley. Lift your eyes to Haystacks his favourite place. 1907-1991.

South Window, St. James's Church (interior), Buttermere, United Kingdom where they was near

Wainwright's Yard. Alfred Wainwright was born in Blackburn in 1907, becoming Kendal's Borough Teasurer in 1948. He loved maps and in 1930 visited the Lake District where his life was dramatically changed. In 1955 he published the first of his famous 'Pictorial Guides to the Lakeland Fells'. The text was written in his characteristic, clear hand which was augmented by meticulous maps and sketches. The books were printed, and later published, by 'The Westmorland Gazette' in Kendal, selling over one million copies. For some years he was curator of Kendal Museum. In 1984 he opened 'Kapellan' as headquarters of Animal Rescue Cumbria. He died in 1991.

Wainwright's Yard, Highgate, Kendal, United Kingdom where they was

View of Richmond "There is a thrilling view of Richmond ahead. Richmond is a town unlike others, a place unique, rich in relics of the past, steeped in a long history that still lingers in the ramifications of its castle and the narrow alleys and quaint buildings that huddle in the shelter of the massive Norman keep. The castle, dramatically poised on a cliff high above the Swale, is a dominating feature. It is a town of reminders of times long past. It is too good to be by-passed." Alfred Wainwright 1907-1991 'A Coast to Coast Walk'

On 25th September 1938 Alfred Wainwright left here on his Pennine Journey and returned on 5th October having walked a distance of around 210 miles.