Sir Christopher Hatton KG (1540 – 20 November 1591) was an English politician, Lord Chancellor of England and a favourite of Elizabeth I of England. He was one of the judges who found Mary, Queen of Scots guilty of treason.

Originally the house of Sir Christopher Hatton a favourite of Queen Elizabeth I and aft...
Presteigne, United Kingdom 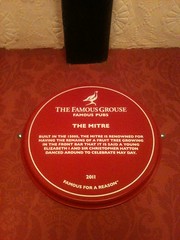 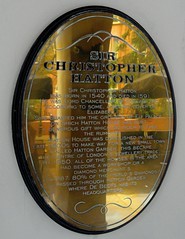 ?, Presteigne, United Kingdom where they lived

The Mitre Built in the 1500s, The Mitre is renowned for having the remains of a fruit tree growing in the front bar that is said a young Elizabeth I and Sir Christopher Hatton danced around to celebrate May Day

Sir Christopher Hatton was born in 1540 and died in 1591. He was Lord Chancellor of England and according to some, a secret lover of Elizabeth I. She granted him the grounds of Ely Palace on which Hatton House was built, a generous gift which did much to fuel the rumours. Hatton House was demolished in the late 1600s to make way for a new small town called Hatton Garden: this became the centre of London's jewellery trade. By 1850 all of the houses in the area had become a workshop or a diamond merchant's. In 1987 , 80% of the world's diamonds passed through Hatton Garden where De Beers has its headquarters.

4, Leather Lane, Farringdon, London, United Kingdom where they was