musician, Fellow of the Royal College of Music, Knight Bachelor (from 1911), and Companion of Honour (from 1944)

Sir Henry Joseph Wood CH (3 March 1869 – 19 August 1944) was an English conductor best known for his association with London's annual series of promenade concerts, known as the Proms. He conducted them for nearly half a century, introducing hundreds of new works to British audiences. After his death, the concerts were officially renamed in his honour as the "Henry Wood Promenade Concerts", although they continued to be generally referred to as "the Proms". Born in modest circumstances to parents who encouraged his musical talent, Wood started his career as an organist. During his studies at the Royal Academy of Music, he came under the influence of the voice teacher Manuel Garcia and became his accompanist. After similar work for Richard D'Oyly Carte's opera companies on the works of Arthur Sullivan and others, Wood became the conductor of a small operatic touring company. He was soon engaged by the larger Carl Rosa Opera Company. One notable event in his operatic career was conducting the British premiere of Tchaikovsky's Eugene Onegin in 1892. From the mid-1890s until his death, Wood focused on concert conducting. He was engaged by the impresario Robert Newman to conduct a series of promenade concerts at the Queen's Hall, offering a mixture of classical and popular music at low prices. The series was successful, and Wood conducted annual promenade series until his death in 1944. By the 1920s, Wood had steered the repertoire entirely to classical music. When the Queen's Hall was destroyed by bombing in 1941, the Proms moved to the Royal Albert Hall. Wood declined the chief conductorships of the New York Philharmonic and Boston Symphony Orchestras, believing it his duty to serve music in the United Kingdom. In addition to the Proms, he conducted concerts and festivals throughout the country and also trained the student orchestra at the Royal Academy of Music. He had an enormous influence on the musical life of Britain over his long career: he and Newman greatly improved access to classical music, and Wood raised the standard of orchestral playing and nurtured the taste of the public, presenting a vast repertoire of music spanning four centuries. 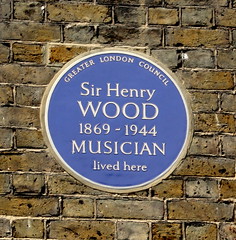 The Queen's Hall 1893-1941. Site of Britain's leading concert hall where Sir Henry Wood founded The Promenade Concerts in 1895. The Queen's Hall was destroyed in The Blitz of 1941.

The Church of the Holy Sepulchre known as St Sepulchre Without Newgate. Built on the site of a Saxon church dedicated to St Edmund the church became known as St Edmund and the Holy Sepulchre. Late, the name became abbreviated to "St Sepulchre". Rebuilt and much enlarged in 1450, the walls, tower and porch survive from that period. Badly damaged in the Great Fire of 1666,the interior was restored in 1670 and has been much altered since. Among famour names associated with the church are John Rogers, Vicar, first Protestant martyr; Roger Ascham, Tutor of Queen Elizabeth I; William Harvery, discoverer of the circulation of the blood; Captain John Smith, first Governor of Virginia and Sir Henry Wood, founder of the Promenade Concerts, whose ashes rest in what is now the Musician's Chapel, with its many memorials to musicians. The church also contains the Regimental Chapel of the Royal Fusiliers.