William Barnes (22 February 1801 – 7 October 1886) was an English polymath, writer, poet, philologist, priest, mathematician, engraving artist and inventor. He wrote over 800 poems, some in Dorset dialect, and much other work, including a comprehensive English grammar quoting from more than 70 different languages. A linguistic purist, Barnes strongly advocated against borrowing foreign words into English, and instead supported the use and proliferation of "strong old Anglo-Saxon speech". 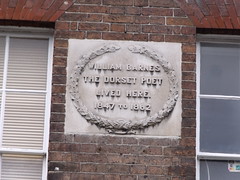