Pietro Mascagni (7 December 1863 – 2 August 1945) was an Italian composer primarily known for his operas. His 1890 masterpiece Cavalleria rusticana caused one of the greatest sensations in opera history and single-handedly ushered in the Verismo movement in Italian dramatic music. While it was often held that Mascagni, like Ruggero Leoncavallo, was a "one-opera man" who could never repeat his first success, L'amico Fritz and Iris have remained in the repertoire in Europe (especially Italy) since their premieres. Mascagni wrote fifteen operas, an operetta, several orchestral and vocal works, and also songs and piano music. He enjoyed immense success during his lifetime, both as a composer and conductor of his own and other people's music and created a variety of styles in his operas. 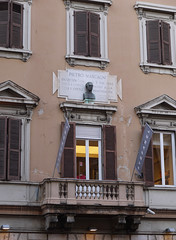 Via Corsa, Rome, Italy where they was