puppeteer and author of The Peep Show

Walter Wilkinson (1888–1970) was a puppeteer, writer and artist. According to a plaque erected in the garden of a house in the village of Selworthy, Somerset, he was born in 1888, began his wandering from this location and died in 1970. It is inferred in his fourth book that he fought in the First World War on the Western Front: "Strange to think that only a few weeks ago she was charming young men in Vienna, men at whom, a few years ago, the showmen might have been pointing a rifle". 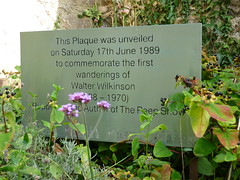 ?, Selworthy, United Kingdom where they was