Walter Carroll (1869-1955) was a professional composer and teacher. He was born in Strangeways, Manchester, and received his bachelor's degree in music at Durham University. Carroll returned to Manchester to earn another bachelor's degree and the first Mus.D. ever conferred in Manchester. In 1893 he became a lecturer in harmony at the newly formed Royal Manchester College of Music and held chairs at the college of harmony and composition (1904-1920), and of the art of teaching (1909-1920). Carroll started a training course for music teachers in 1907 and was appointed music adviser by the Manchester Education Committee in 1918. He gave up all his other work in 1920 to concentrate on music for children. Carroll regularly visited and advised teachers in about four hundred schools, lecturing on the teaching of singing, instrumental music, and music appreciation. The city’s education department had decided that children with no musical training should have a chance to perform. The Manchester Children's Choir was therefore formed in 1925 by Carroll from elementary schools in the area. The choir existed from 1925-1939 and gave concerts, usually in local town halls, during Civic Week. The concerts with the Halle lasted from 1929 until Walter Carroll's retirement in 1935. This choir performed on the famous 1929 recording of Nymphs and Shepherds. He composed many piano pieces for children, published as collections with titles inspired by nature, such as 'The Countryside', 'Sea Idylls', 'Forest Fantasies' and 'River and Rainbow'. Published by Forsyth Brothers Ltd., these miniatures are still popular, one of them, "Alone at Sunset", is included in the Associated Board of the Royal Schools of Music (ABRSM) 2011–2012 Grade 4 examination. "From the Cliffs", one of the ten pieces in 'Sea Idylls', has been a recurring entry for more than 60 years in Canada's Royal Conservatory of Music Grade 5 piano syllabus. "Walter Carroll's place in English teaching music is like that of Norman Rockwell in American painting," says Canadian pianist Arne Sahlen. "They both were derided for a time as cheaply sentimental, but public regard has risen for their work that expresses quintessential aspects of their countries and cultures." More than his own compositions, he is perhaps best remembered for his compilation for young piano students of short keyboard pieces by J.S. Bach, First Lessons in Bach for the Piano (Manchester: Forsyth, 1908). Carroll retired in 1934 and died at his home in Didsbury in 1955 at the age of 86. 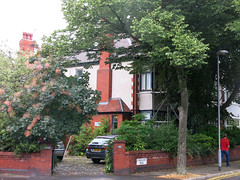